I bit the bullet.

I’ve managed to complete a few projects this year which gave me enough money to sponsor the upgrade :).

Yep it’s a costly upgrade (but I still have a few more things to get, like 2 SSDs, one for my older Core 2 13″ MBP and the new one) but it’s well worth every cent spent.

I decided to upgrade my work/play/all-around laptop for several reasons: 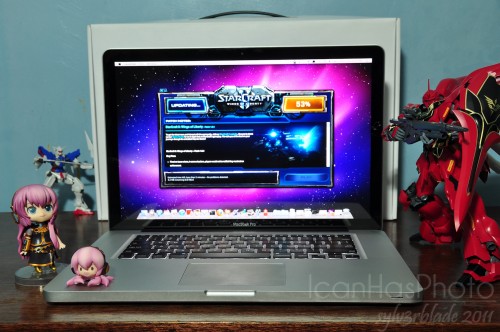 Powered by an i7 Sandy Bridge chip, this brand new model is wickedly fast. Of course it’s still hindered by the 5400 RPM HDD (which I’ll be remedying in a few months or so) but in terms of number crunching and general response time, it’s still a cut above my older Core 2 Duo powered MBP. The 6490M is still quite slow (yeah, yeah, I should’ve gotten the better model) in terms of drawing pixels but it’s still more than enough to run the only games I play on the Mac, StarCraft 2 and Civilization V.

I could’ve waited until Lion was released before getting this unit but I think it’s well worth forking the customary upgrade fee. Besides, my main computer kicked the bucket at the time so I really needed a beefy machine. :/ Too bad it pushed back my plans on getting a new rig till October (or December at worst) but at least I’ll be able to get either a Z68-based or Bulldoser-based rig by then. So yeah, everything went better than expected 🙂